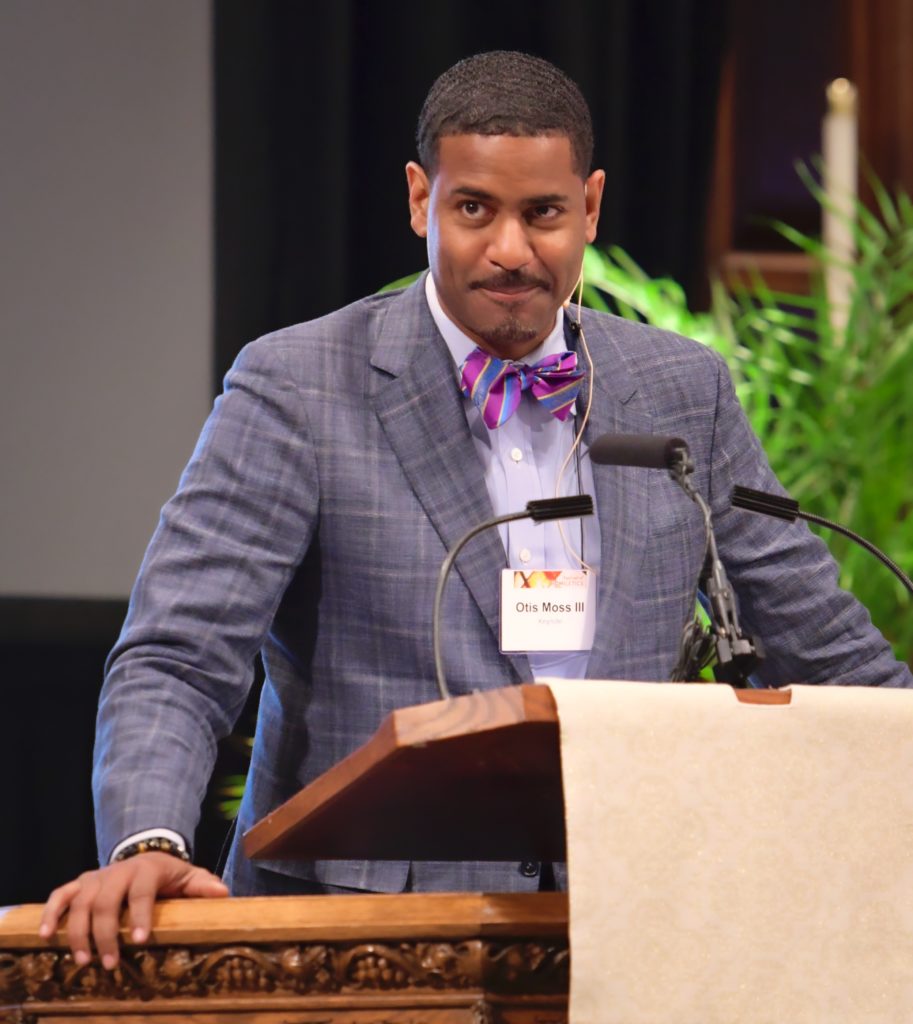 Getting into the game, Rev. Otis Moss III opened his first sermon with a sports analogy, explaining how following sermons from James Forbes Jr. and William Barber II made him feel like James Jones, NBA player and three-time champion. Never heard of him? Rev. Moss joked that James Jones got all his championship rings from waiting ready on the bench, essentially in the right place at the right time. But Moss was in no way sliding into the pulpit on somebody else’s coattails, for he shared the Word of God with his own powerful voice, rousing people out of the pews for a standing ovation by the end of the hour.

Continuing with the athletic anecdotes, Moss joked about the time he found promise in his son’s golfing interest, only to learn that instead of harboring aspirations to emulate golfing champion Tiger Woods, his son was hoping to meet the tiger hiding in the “woods” dotting the golf course.

Alongside such humor, Moss connected doubt about the Resurrection to mainstream skepticism about whether Woods would achieve his recent comeback as a golf champion. He also contextualized the Resurrection story through his own translation and expansion of Luke 24:9-12; the OM3 edition, you could call it — he sure did, and it was a hole-in-one.

Such humor can transform discomfort into something familiar and tameable, as a shy tiger must have seemed more approachable and interesting to Moss’ son than the grown-up world of golf. And there is such pain and discomfort after the Crucifixion, when “the brothers ignored the sisters” who brought news of the Resurrection.

Moss kept circling back to the miraculousness of the Resurrection illustrated by why the women gathered in the first place. For “the empty tomb is an act of defiance” to Empire which is convinced it holds all the power, but to visit the tomb with spices, to deliver the aroma of life to the place of death, that is an act of love. When they set out that morning, the women did not know what to expect besides the tomb and foul smell of death. But they still show up for each other, in an act of love that goes beyond hope and denies the end through the continuation of relationship, pushing into the next chapter even when it is painful to turn the page. As Moss continued, “The Bible is written by the oppressed for the oppressed… recognizing this will change your perspective.”

So it is the persistence and healing acts of love demonstrated by the oppressed in every age, the same persistence of the one who was crucified — who, Moss reminds us, died on the cross as a non-violent, revolutionary, dark-skinned, Palestinian Jew — this persistence informs what we do next. “Our call is to bring spices to places of deep pain and deep hurt.”

Emotions were building in the sanctuary, and Moss’ words were met with enthusiastic applause. He continued to offer examples as to what such spices and “changing the atmosphere” can accomplish, with particular lessons from people in recovery and what it looks like to support and celebrate their ongoing journey in our congregations, bringing love to death, relapse, and related experiences of despair and persistence.

“When the church is willing to go into the spaces of death and bring the spices of life, this is where we will see transformation,” Moss explained, emphasizing throughout the sermon that “it’s too early to proclaim that the church is dead” or “the end of your ministry.” With so much transformation still possible, Rev. Moss encourages us to stop worrying so much about declining church attendance or budget growth so we can rouse ourselves into public life to show what God’s transformational love can do.