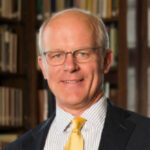 Peter W. Marty serves as senior pastor of St. Paul Lutheran Church, a 3500-member congregation in Davenport, Iowa, and editor/publisher of The Christian Century, a journal devoted to shaping America’s conversation about religion and faith in public life. He writes a monthly column for the Century.

A frequent preacher and speaker at churches and conferences across the country, Marty has written numerous articles related to culture, character, and faith issues in our day. He is the author of The Anatomy of Grace (Augsburg Fortress, 2008). From 2004-2009, he served as host of the national radio broadcast, Grace Matters.

In 2010, the Academy of Parish Clergy named him “Parish Pastor of the Year,” an award recognizing leadership excellence and faithfulness in congregational development.

Peter has preached in some of America’s more notable pulpits including Washington National Cathedral, Duke Chapel, and Yale University. From 2010 to 2016 he served as the lead columnist for The Lutheran magazine. In 2009, he was named the visiting Hoskins Fellow at Yale Divinity School.

Peter Marty has served on various hospital, college, foundation, and community boards. He has served as narrator for different faith broadcast documentaries. Marty is a one-time fellow of the Fund for Theological Education, past member of the Louisville Institute’s Pastor’s Working Group, and a former participant in the Duke Project for the Study of Ministry.

He is a graduate of The Colorado College and Yale Divinity School, and was the recipient of an honors fellowship in history for study at Oxford University.

Peter W. Marty has piloted interfaith dialogue events, been active in anti-hate group efforts, and served on different ecumenical ministry boards. On the St. Paul church campus he leads a pastoral residency program funded, in part, by the Lilly Endowment Inc. This program, designed for fostering pastoral excellence, is the only such program in the country situated in a Lutheran Church setting.

He is the recipient of two honorary doctorates. Peter is married to Susan and they have two adult children.