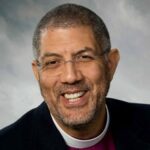 Bishop of the Episcopal Diocese of Atlanta

The Right Rev. Robert Christopher Wright was elected June 2, 2012, by lay delegates and priests of the Diocese of Atlanta to become the 10th bishop in the diocese’s 105-year history. He was ordained and consecrated a bishop on Saturday, Oct. 13, in a special worship service at Martin Luther King Jr. International Chapel on the campus of Morehouse College. He is the first African American to become an Episcopal bishop in Georgia.

Wright was born Feb. 3, 1964, in a Roman Catholic orphanage in Pittsburgh, Pennsylvania, and at the age of nine months was adopted by Earl C. and Charlene Wright. After graduating high school, he served five years as a U. S. Navy helicopter crew chief and search and rescue diver before entering Howard University in Washington, D.C. Upon graduating from Howard in 1991 with a degree in history and political science, he worked as a child advocate for two mayors and for the Children’s Defense Fund. He later earned a certificate in biblical studies at Ridley Hall, Cambridge University in England, and a master of divinity from the Virginia Theological Seminary, Alexandria, Virginia. On July 4, 1998, he married Beth-Sarah Panton. Bishop Jane Holmes Dixon, in the Diocese of Washington, ordained him a priest on February 13, 1999.

Prior to moving to Atlanta, he was Canon Pastor and Vicar of the Congregation of St. Saviour at the Cathedral of St. John the Divine in New York, New York,(1998 – 2002) and served as chaplain of the Cathedral School in New York City (1998 –2000). He received the Harvard Summer Leadership Certificate in 2006 and the Certificate in Pastoral Leadership from Oxford University, England, in 2007.

After he was ordained bishop, he was awarded honorary doctor of divinity degrees from the Virginia Theological Seminary and from the School of Theology at Sewanee: The University of the South. At the time of his election as bishop he was rector of historic St. Paul’s Episcopal Church in Atlanta, Georgia, where he had served 10 years, a period that saw dramatic growth. Also during the past decade, Wright has served the Atlanta community as a member of Leadership Atlanta, on the board of Holy Innocents’ Episcopal School. In the Diocese of Atlanta, in addition to serving as the dean of the Mid-Atlanta Convocation, he has chaired the Commission on Ministry, the deputation to the General Convention, and served as youth dean at Camp Mikell. He also serves as an adjunct professor at Virginia Theological Seminary.  In 2015, he was named among the 100 Most Influential Georgians by Georgia Trend magazine.

He is married to Beth Sarah-Wright, Ph.D., an inspirational speaker and author, and mother to their five children: Jordan, Emmanuel, Selah, Noah and Moses-Daniel.