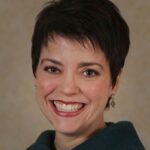 The Reverend Shannon Johnson Kershner grew up in the manse of the First Presbyterian Church of Waco, Texas—the daughter of Jimmie and Sherry Johnson, a Presbyterian pastor and a school teacher.

She graduated with a Bachelor of Arts degree from Trinity University in San Antonio and went on to receive a Master of Divinity from Columbia Theological Seminary in Decatur, Georgia, where she was awarded the Columbia Leadership Award for demonstrating the greatest potential for future leadership within the Presbyterian Church (USA).

In 2014 the members of Fourth Presbyterian Church called Shannon to be our next Pastor. She began her duties on May 1, preached her first sermon at Fourth Church on May 18, 2014—the Sunday we celebrated the 100th anniversary of the 1914 dedication of our Michigan Avenue campus—and on Sunday, September 21, 2014, was officially installed as Pastor of this congregation.

Shannon also served as a member of the strategy team of the NEXT Church movement in the PCUSA for nine years. As Shannon describes it, “NEXT Church is an organic movement within the PCUSA that began when some pastors got together for honest conversation about what might be next for our denomination. . . . NEXT is committed to encouraging healthy tissue in the life of the church. We are committed to strengthening relationships between healthy leaders in our denomination, as well as between congregations. We desire to be a platform for folks who are doing innovative and good ministry to tell their story so that all of us can learn from it.”

Shannon’s sermons have been published in the Journal for Preachers and Lectionary Homiletics, and she has been a preacher and worship leader at various worship and preaching conferences.

Shannon is married to Greg Kershner, a financial advisor who, like Shannon, has a Masters of Divinity degree from Columbia Seminary. They have two children, Hannah, who is in college, and Ryan, who is in high school.