Highlights from Opening Night at #Homiletics2019 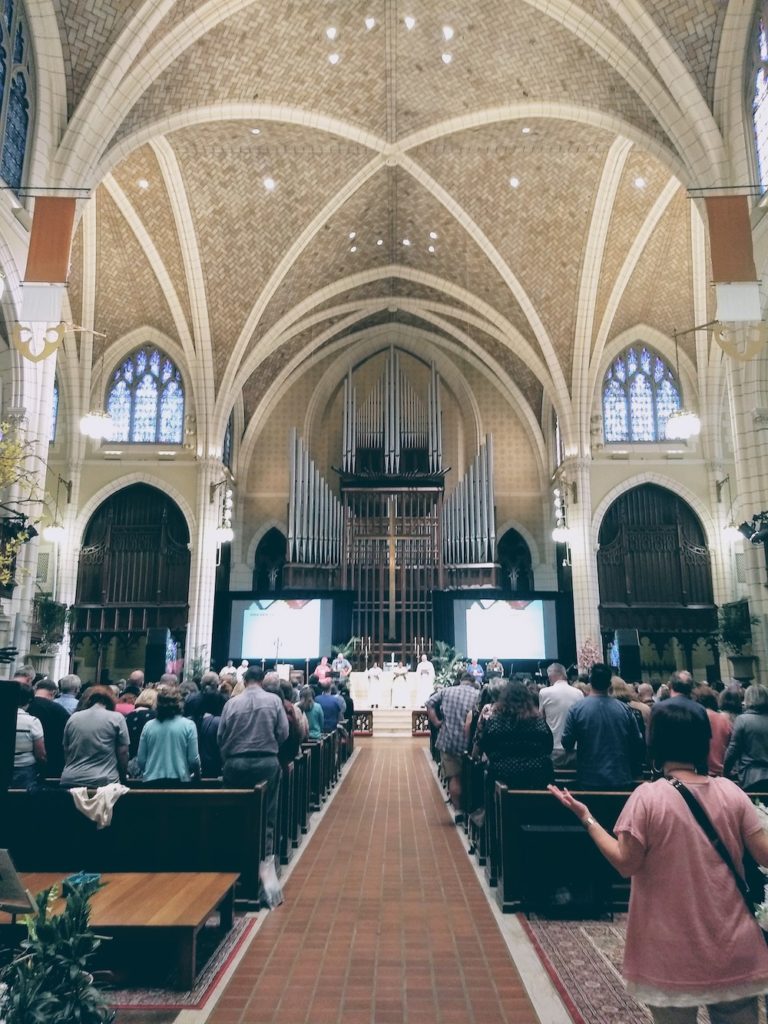 Hundreds gathered for worship in Central Lutheran Church’s beautiful sanctuary as Karoline Lewis introduced this year’s theme, inspired by Frank A. Thomas’ book How to Preach a Dangerous Sermon. Instead of playing it safe in the pulpit, what does it mean to be a voice for moral imagination in our world right now?

Attendees were welcomed into worship, chorusing how “We Gather Here on Sacred Ground,” specifically land taken from the Dakota people. Singing as one, the congregation of 1600 prayed “with open hearts, we yearn for right relationship…with open hands we aim to share the call” to serve as keepers and tread lightly on the Earth.

Centered for worship, the Service of Holy Communion continued with melodies and rhythms led by Mary Preus, Tom Witt, and their fellow musicians, with songs uplifting gratitude and a spirit of persistence echoed in the sermon by Barbara Lundblad. Her preaching focused on the Parable of the Persistent Widow in Luke 18, drawing together many examples of persistence in our world today: LGBTQ+ ministers, migrant mothers, suppressed voters, and the transgender women protesting persecution at Stonewall 50 years ago.

Rev. Lundblad reminded the audience, “The widow insisted on the goodness of the Torah without ever going to a ‘Festival of Homiletics,'” a reminder to humble all those gathered. Even without formal theological training, the widows and other persistent preachers-without-a-title in our lives share wisdom that must be heeded for what is is — true nudging of the Spirit.

Worship continued with music rising to the high-arched ceiling,  peace passed between the pews, and Communion shared by hundreds, followed by a rousing sending into a week of learning and renewal. May we all be strengthened for the journey!

Following worship, our first lecture of the Festival of Homiletics 2019 was given by Rev. Dr. James Alexander Forbes, Jr. Beginning with clear purpose, Forbes announced his intention “to recruit each one of you to be part of God’s dream team.” He acknowledged the MVP of his own dream team, emerging from partnership with his wife, Betty Forbes – the two have been married 55 years. Together, the couple sang a song about being God’s beloved children together, and invited the audience to join in. After this introduction, Forbes dove into deep truths about persistence in the face of systemic racism, economic injustice, and violence in society.

In order to respond to such forces, Forbes called on the church to regain its prophetic impulse and let it loose.

Looking forward to a great week to come!

PrevPreviousWelcome to the Festival of Homiletics 2019: “Preaching as Moral Imagination!”
NextTuesday Social Media Highlights from #Homiletics2019Next