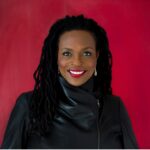 Jacqui fell in love with God when she was eight years old, sitting in the pews at a little Presbyterian Church on Chicago’s South Side. She was taking communion for the first time, when her mom explained: “This bread means God will always love you; this cup means, God will never leave you.” Jacqui became hooked on God, and her “God is Love. Period” theology  began to germinate. Later that year, just before her ninth birthday, The Rev. Dr. Martin Luther King, Jr. was assassinated; King’s death both traumatized and catalyzed Jacqui to work against racism and poverty in America, as a young adult in the corporate world, and then as a clergy.

Jacqui earned her Master of Divinity from Princeton Theological Seminary, focusing on preaching and urban ministry in 1992. She served a coalition of  churches in Trenton NJ, using activism, worship, and the arts to create a justice-forward, multi-ethnic, interfaith community. Jacqui earned her M.Phil. (2003) and Ph.D. (2004) in Psychology and Religion from Drew University, focusing on  gender and racial/ethnic identity development.

Jacqui’s research on leaders in multi-ethnic congregations led her to New York to study Middle Collegiate Church. Middle Church hired Jacqui in 2004, and she became the Senior Minister in 2005. Under hear leadership, Middle Church has grown from a 400-member church to a 1,900-member multi-ethnic, multicultural, fully welcoming, and inclusive movement for love and justice. Jacqui and Middle Church have been in the public square in places like The Today Show, Good Morning America, MSNBC (Melissa Harris-Perry, Joy Reid, Chris Hayes), The Takeaway, The Brian Lehrer Show,  The AP, Religion News Service, The Washington Post, The New York Times, The Wall Street Journal, The New York Post, The New Yorker, Essence, and The Huffington Post.

Jacqui co-founded The Middle Project—an institute that prepares leaders for a more just society—with  her husband and partner in anti-racist work,  The Rev. John Janka. Together with Middle Church, the Middle Project has hosted sixteen national conferences to train leaders across many sectors to dismantle racist, homophobic, sexist and classist systems of oppression with the power of fierce, revolutionary love.

Ordained in the Presbyterian Church (USA), Jacqui is the first African American and first woman to serve as senior minister in the Collegiate Church, which was founded in New York City in 1628. Jacqui’s  books include The Power of Stories: A Guide for Leading Multi-racial, and Multi-cultural Congregations; 10 Essential Strategies to Grow a Multiracial, Multicultural Congregation; and the children’s book, You Are So Wonderful!  Fierce Love: A Bold Path to Ferocious Courage and Rule-Breaking Kindness That Can Heal the World.

Jacqui created and hosted two shows: Just Faith (MSNBC.com) and Chapter and Verse (PBS). She is the host of the  Love.Period. Podcast, produced by the Center for Action and Contemplation, and the co-host of The Four Podcast: Talkin’ about Black Life, Love, Power & Joy. Jacqui is a Senior Fellow at Auburn Seminary and Nana to Ophelia and Octavius, who bring joy to her soul.